Before making a system highly available, you must understand the various ways it can fail.

Vector does not need a disk during runtime unless you’re using a component that requires it, such as disk buffers or the file source and sink.

Mitigate individual node failures by distributing Vector, and its load balancer, across multiple nodes. Front the Vector nodes with a load balancer that will failover when a Vector node becomes unreachable. You should have enough capacity to distribute the tolerated node failure across your available nodes. A good rule of thumb is that no single node should process more than 33% of your data. Finally, automated self-healing should detect and replace unhealthy nodes. 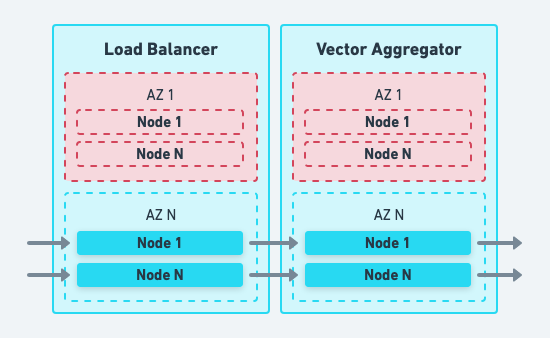 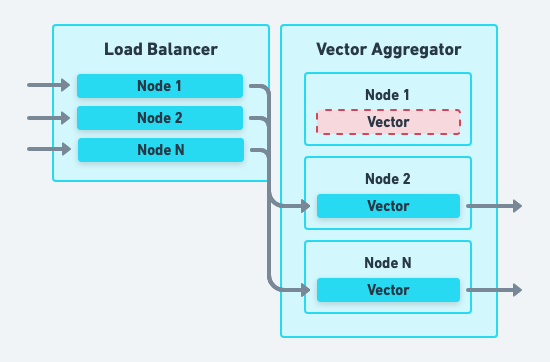 Mitigate data receive failures with Vector’s end-to-end acknowledgements feature. When enabled, Vector only responds to the clients when data durably persists. Such as writing the data to the disk buffer or a downstream service. 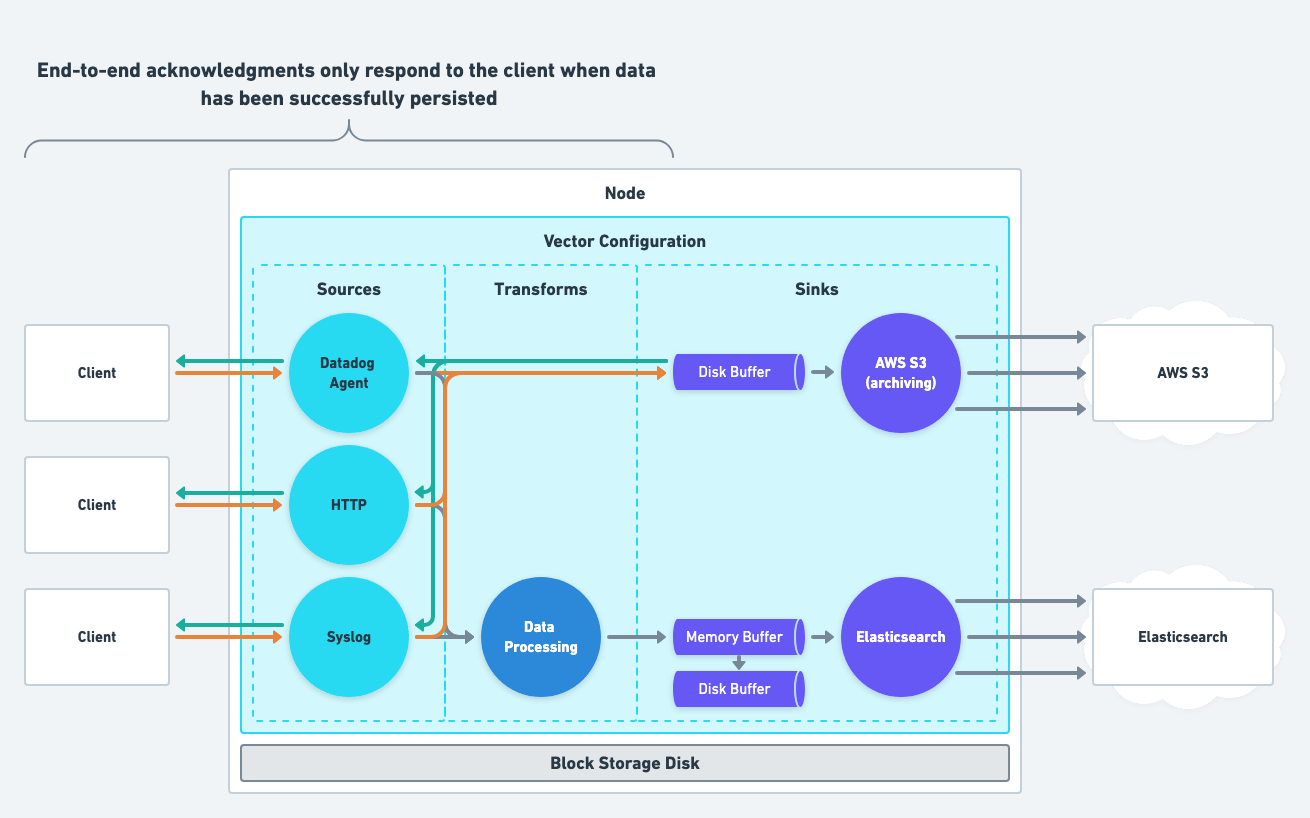 This feature should be paired with disk buffers or streaming sinks to ensure acknowledgements are timely.

Mitigate data processing failures with Vector’s dropped events routing. remap transforms have a dropped output channel that routes dropped events through another pipeline. This flexible design allows the routing of dropped events like any other event.

We recommend routing dropped events immediately to a backup destination to prioritize durability. Then, once data is persisted, you can inspect it, correct the error, and replay it.

The following is an example configuration that routes failed events from a remap transform to a aws_s3 sink:

Support for dropped channels in other components is forthcoming. 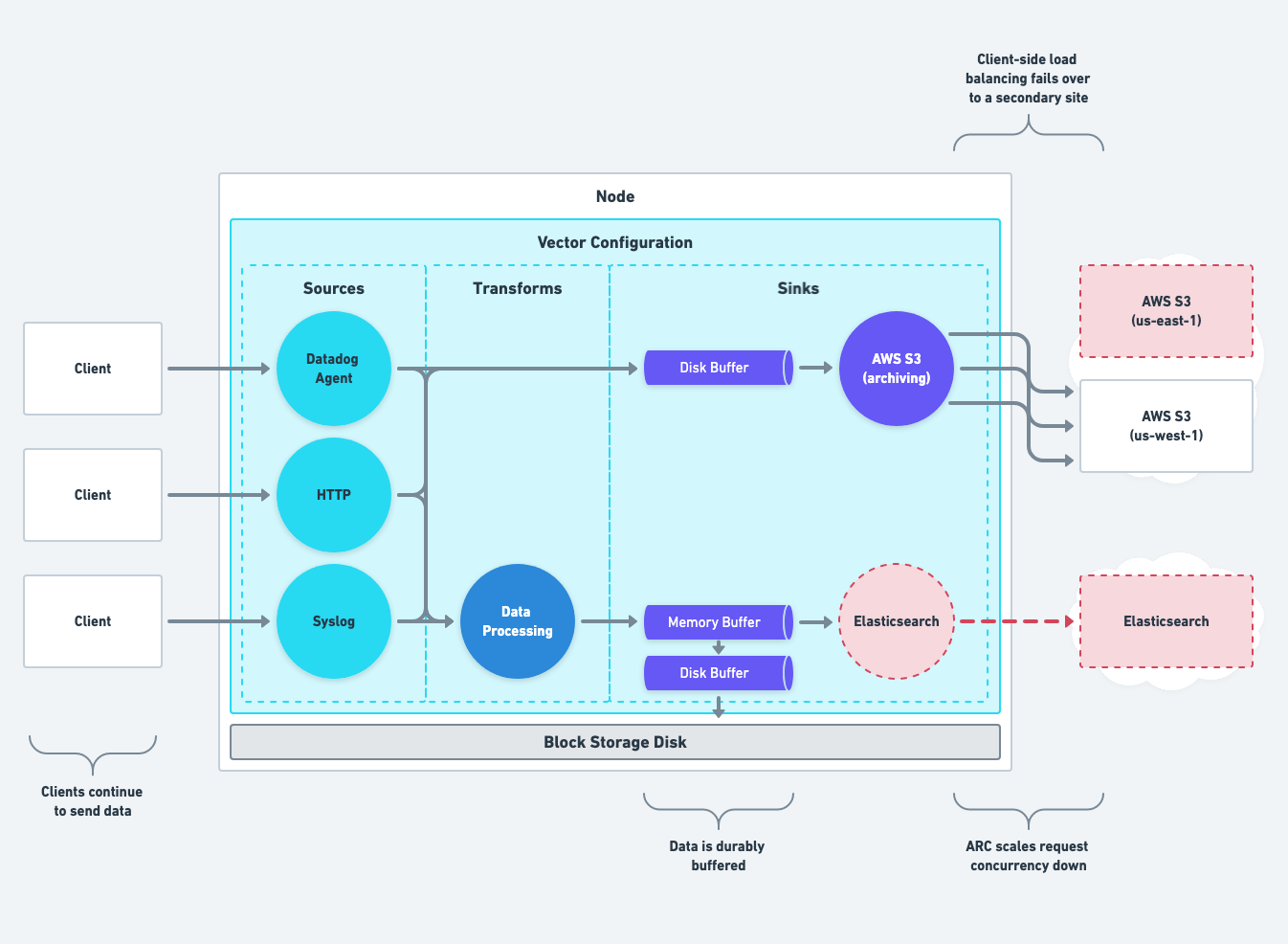 The mitigation tactics discussed in this section are advanced tactics that should only be used in environments with stringent availability requirements where the cost tradeoffs are worth it.

Mitigate Vector system failures by failing over to intra-network standbys. To recover Vector, standbys should be within the same network to avoid sending data over the public internet for security and cost reasons.

Mitigate total load balancer failures by failing over to your standby load balancer. Failover is typically achieved with service discovery or DNS.

Mitigate total aggregator failures by failing over to your standby aggregator. Failover is typically achieved with service discovery and DNS.

Taking the above failure modes, we end up with the following strategy to achieve high availability.

Deploy Vector within each network boundary to contain the blast radius of any individual aggregator failure. This mitigates a single point of failure. 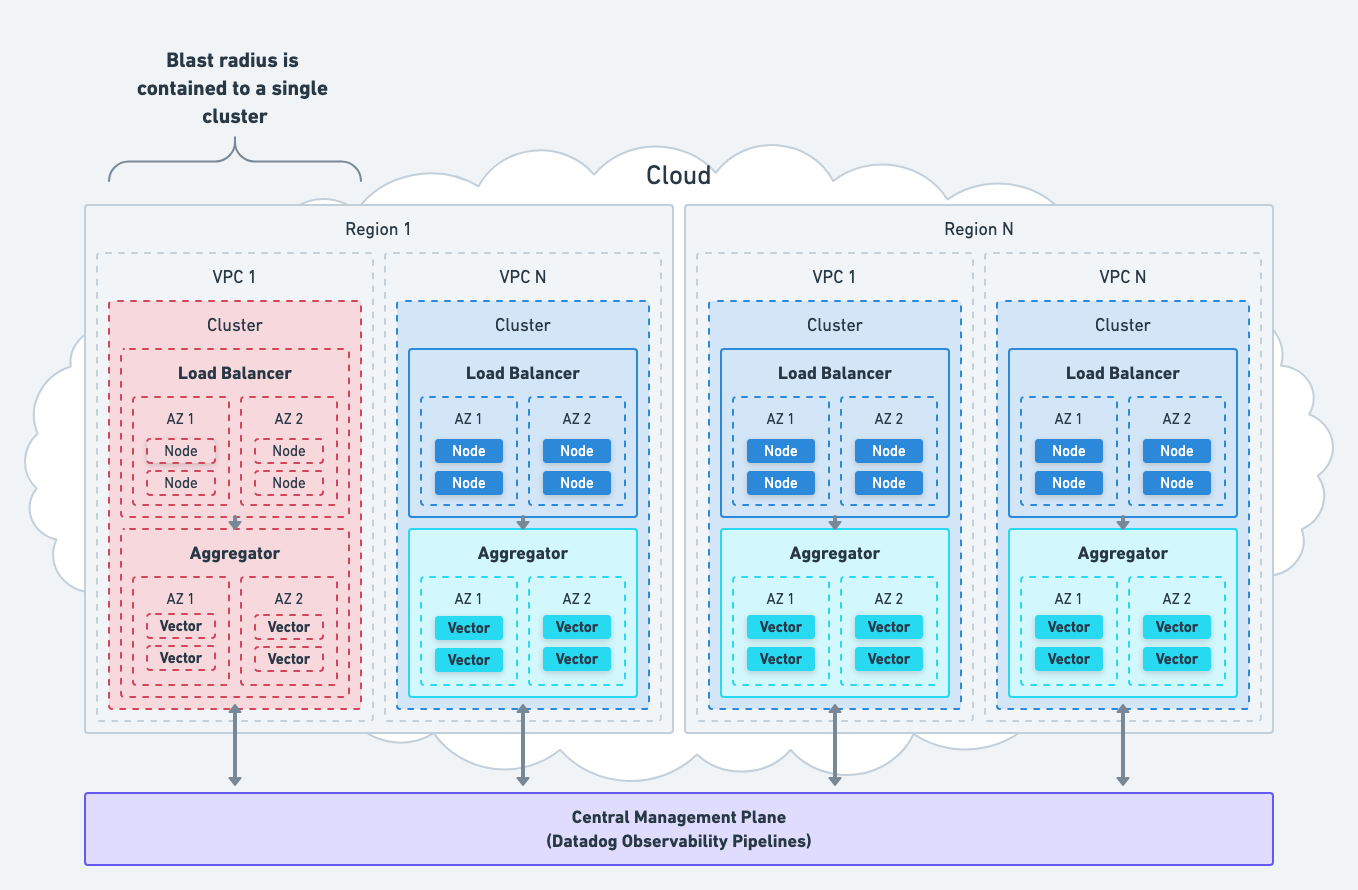 More detail can be found in the working with network boundaries section in the deployment architecture document.

Mitigate hardware failures by distributing your aggregators and load balancers across multiple nodes and availability zones: 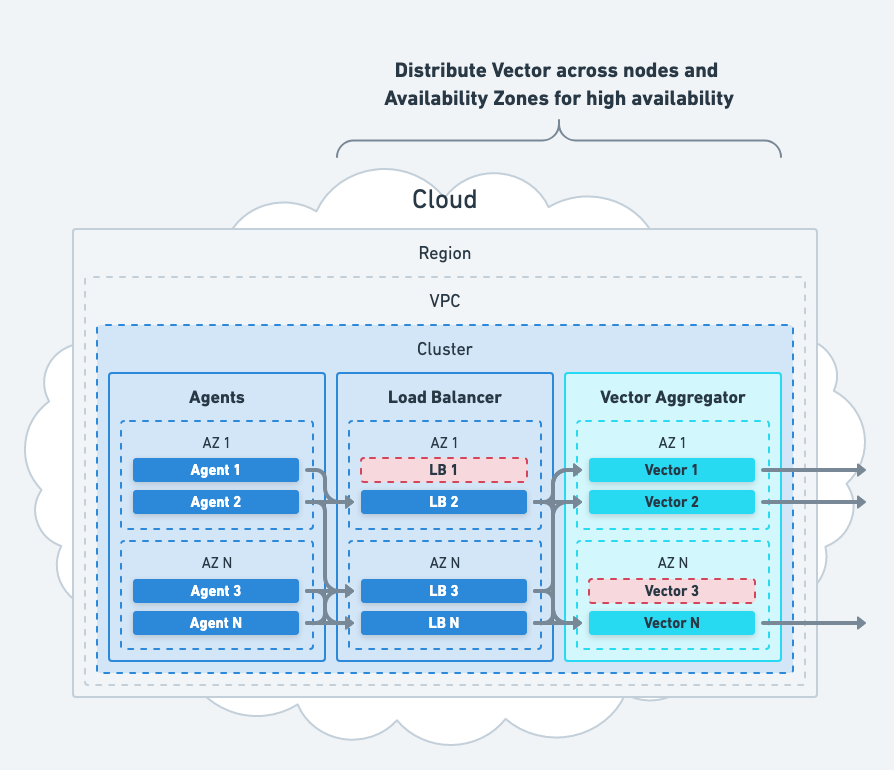 Mitigate software failures by configuring your Vector instances as follows: 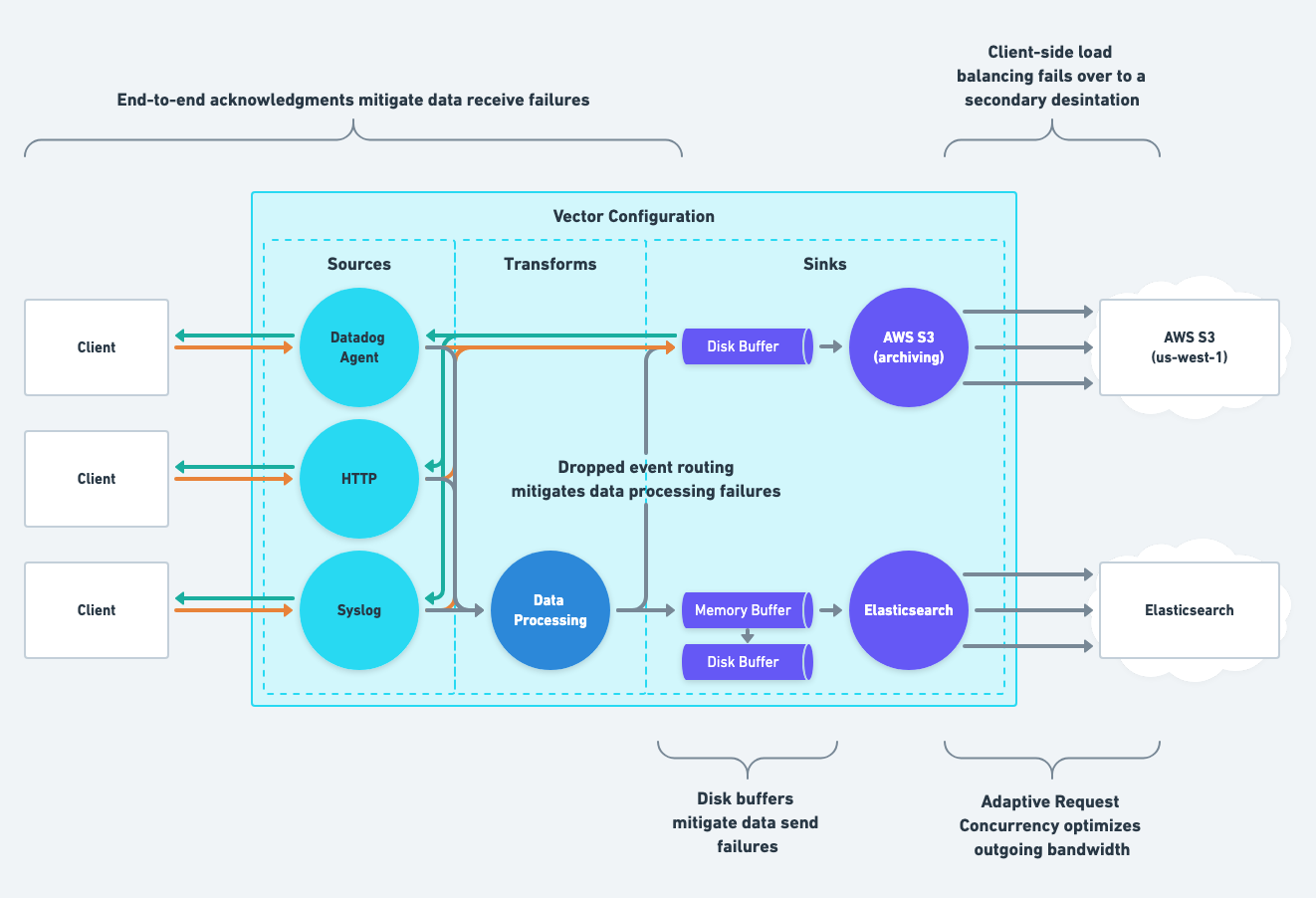 This is an advanced tactic that we only recommend for production environments with stringent availability requirements.

Mitigate Vector system failures by failing over to intra-network standbys. Failover is typically achieved with service discovery or DNS.

Vector is an infrastructure-level tool designed to route internal observability data. It implements a shared-nothing architecture and does not manage state that should be replicated or transferred to your disaster recovery (DR) site. If the systems that Vector collects data from fail, then so should Vector.

Therefore, if your entire network or region fails, Vector should fail with it and be installed in your DR site as part of your broader DR plan.

Vector can play an essential role in your disaster recovery (DR) plan for external systems. For example, if you’re using a managed destination, such as Datadog, Vector can facilitate automatic routing data to your Datadog DR site via Vector’s circuit breakers feature. 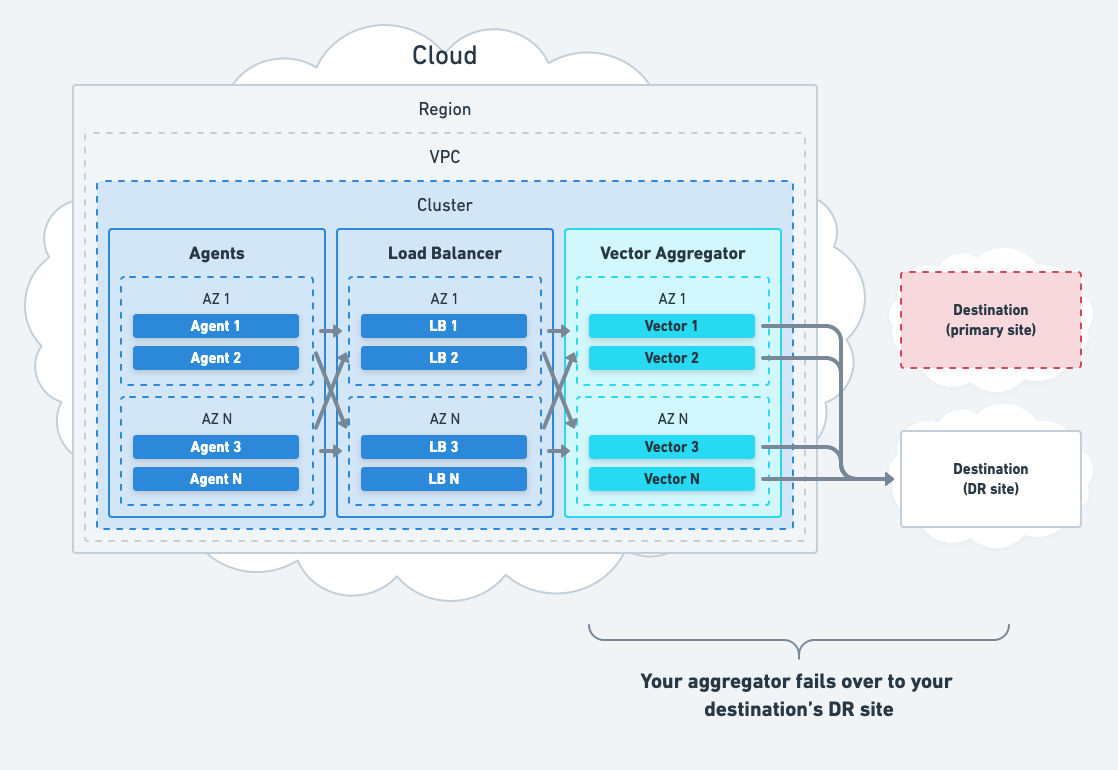